The 28-year-old has joined the ​Arabian Gulf League​ club after spending two seasons in the Chinese Super League with Guizhou Hengfeng Zhicheng and Henan Jianye.

The 20-cap international has been named in the Caltex Socceroos’ 30-man squad for the upcoming World Cup Qualifiers against Japan and Thailand.

​McGowan famously supplied the perfect long pass for Tim Cahill to score his wonder goal at the 2014 FIFA World Cup against Holland in Brazil. ​

Caltex Socceroo defender Ryan McGowan pulled rank on his younger brother Dylan so he could get some much-needed rest on game day after he was a late call up to the national team.

Ryan was given the nod for Thursday night’s World Cup qualifier at breakfast on the day of the game, barely 36 hours after arriving in Adelaide following a nightmare 56-hour journey  from China.

With defender Bailey Wright pulling up sore, Ryan was thrust into the starting XI on the right of a three-man defence after arriving late on Tuesday night.

And he was rooming with younger brother Dylan who had also been called up to the national team.

Ryan had a nightmare trip from China one which was documented on Instagram.

The Chinese Super League defender spoke to Fox Sports after his first starting XI appearance since last October and revealed Dylan was key to him getting enough rest.

It took me 56 hours to get here. I left in a taxi from my game from the stadium and thought I’d be arriving in Adelaide on Monday morning.

It was a bit of a rush and tumble to get into the line up. He named the team yesterday and I wasn’t in it.

But Bailey pulled up with an injury and I got chucked in.

It was a little fast and frantic but the second half we calmed down a lot better and played well.

The boss called me in after breakfast and said I’d be starting and I’m rooming with him [Dylan] and I told him immediately but told him to be quiet so I could sleep today.

He’s the younger brother so he has to do what he’s told!

The shirt off the great mans back. A million thanks @rmcgowan89 pic.twitter.com/NaitumdMUH

It’s a little bit different. We had played a back four for a long time. But the boss likes to change it and get us playing and with the midfielders we have it’s probably better to have more of them than more defenders.

It’s probably going to take more time to make us fully gel. But again we scored three goals from open play so you can’t have it both ways sometimes!

A sell-out crowd of around 65,000 is expected at the King Abdullah Stadium in Jeddah for the clash between the top two sides in the group.

“If you look at where most of the boys play, we are playing in front of big crowds and intimidating crowds every single week,” McGowan told FFA TV.

“We enjoy that, we embrace it and it’s better for us to play in stadiums that are packed and hostile than playing in front of no one.

“We enjoy that situation and again hopefully it will be a big crowd on Thursday night and we can get a good result and then it will be an even bigger crowd back in Melbourne against Japan.”

McGowan is expected to start at right back against Saudi Arabia after Milos Degenek was ruled out of the squad last week through injury.

And the 27-year-old, who plays for Henan Jianye in the Chinese Super League, has been a lucky charm for the Caltex Socceroos recently.

Of the four stars McGowan has made in the last 12 months, the side has yet to concede a goal with him on the pitch.

“Our main objective is to get to Russia so if that’s me playing four games in three years or playing every single game, it’s up to me when I get that chance to make sure I don’t put a foot wrong and keep a clean sheet as a defender and we progress from there.

“The fullback position is one that has been chopped and changed a little and as one of the players in those positions you want to be doing well and making sure it’s more difficult for him to take you out of the team than to put you in,” McGowan added. 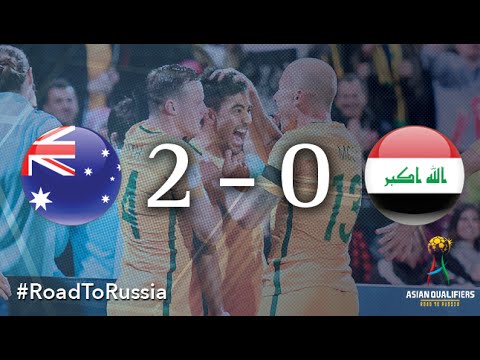 There were plenty of Aussie goal scorers across Asia over the weekend. Here’s the wrap of how our overseas contingent fared for their clubs.
ASIA
Ryan McGowan scored his first goal for Henan Jianye against Guangzhou Evergrande in the Chinese Super League.
The Caltex Socceroo defender showed all the intent of a striker to spring the off-side trap, before chesting the ball down and firing past the goalkeeper.
The finish gave his side an early advantage but unfortunately they couldn’t hang on against the reigning ACL champions, going down 2-1 on their travels.

Trent Sainsbury notched another shutout as part of Jiangsu Suning’s backline. The CSL league leaders eased to a 2-0 win against Shanghai Shenhua to retain top spot on the ladder.

Michael Thwaite’s Lianing Whowin had to settle for a point following a 2-2 draw against Tianjin Teda.

Meanwhile Apostolos Giannou had another unhappy night for Guangzhou R&F with his side beaten 1-0 by Shanghai SIPG.

Nathan Burns found the back of the net after just four minutes for FC Tokyo in the J-League however they suffered a 4-2 reverse at the hands of Kawasaki Frontale.

Elsewhere in Japan, Billy Celeski was in action for Ventforet Kofu as they came back to secure a 1-1 result away to Omiya Ardija.

Adrian Leijer’s Suwon FC were soundly beaten 3-0 by FC Seoul in the K-League.

Brett Holman scored the opener for Emirates Club in the UAE midway through the second half as they accounted for Dubba Al Fujairah 2-0 at home.

Tahj Minniecon broke the deadlock for Loyola Meralco Sparks as they went on to claim a 2-0 on the road to JP Voltes in the Philippines’ UFL Cup.

Jason Davidson was back in the starting XI for Huddersfield Town as they picked up a vital three points courtesy of a 2-0 win over Blackburn Rovers at Ewood Park in the Championship.

James Meredith’s Bradford City conceded a late goal that saw the points shared with Shrewbury Town in League One. The 1-1 draw putting a dent in their promotion aspirations.

Mathew Leckie was deployed off the bench for Ingolstadt as they were beaten 2-0 on the road to Darmstadt in the Bundesliga.

Compatriot Milos Degenek experienced the high and lows of football, setting up the opener for the visitors before being sent-off with ten minute to play.

Tomi Juric was up front for Roda JC as they suffered a 3-0 defeat to Eredivisie league leaders PSV.

Chris Ikonomidis was in midfield for Salernitana as they picked up a point in their relegation scrap with Pro Vercelli VS in Italy’s Serie B.

Antony Golec helped ensure FC Sheriff kept a cleansheet as they ran out 2-0 winners against Zimbru Chisinau to retain second spot in Moldova.