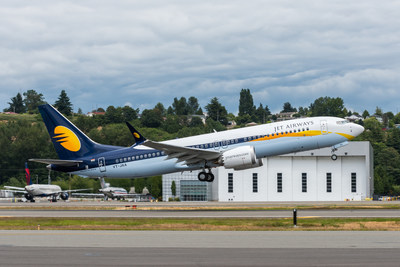 “The new 737 MAX is a critical element to our future growth strategy and we are proud to become the first airline in India to introduce this brand new airplane to our customers,” said Naresh Goyal, Chairman of Jet Airways. “The 737 has been the backbone of our dynamic fleet for many years and we are excited to leverage the superior capabilities of the new 737 MAX. The improved economics and efficiency as well as the passenger pleasing features of the MAX will enable us to strengthen our position as India’s premier airline.”

This delivery marks the first of 150 737 MAX airplanes the Mumbai-based airline has on order with Boeing, following two separate orders for 75 jets placed in 2015 and earlier this year.

“This milestone delivery adds yet another chapter in our long and successful relationship with Jet Airways,” said Dinesh Keskar, senior vice president, Asia Pacific and India Sales, Boeing Commercial Airplanes. “Jet Airways continues to demonstrate their leadership in a highly competitive market and I am confident that these new 737 MAX airplanes will enable the airline to successfully achieve long-term growth going forward.”

Jet Airways is India’s second-largest airline with a fleet of nearly 120 airplanes serving more than 60 destinations across 15 countries across Asia, Europe, North America and elsewhere.

The 737 MAX is the fastest-selling airplane in Boeing history, accumulating more than 4,500 orders from 99 customers worldwide.

The family of airplanes is powered by CFM International LEAP-1B engines, and includes design updates such as Boeing’s Advanced Technology winglet that will result in less drag and optimize performance, especially on longer-range missions. Together, these improvements reduce fuel use and CO2 emissions by at least 14 percent compared to today’s Next-Generation 737s – and by 20 percent more than the single-aisle airplanes they replace.

The announcement marks the largest order in Jet Airways’ history and supports the airline’s replacement strategy to have the most modern and environmentally progressive airplane fleet. The order, previously attributed to an unidentified customer, includes conversions of 25 Next-Generation 737s to 737 MAX 8s, as well as options and purchase rights for an additional 50 aircraft.

“Incorporating the latest design and technology features, the highly efficient 737 MAX will allow us to drive our operational efficiency and reaffirms our commitment to providing a best-in-class full service travel experience to our guests,” said Naresh Goyal, chairman of Jet Airways. “This order is an endorsement of our confidence in the long-term prospects of the Indian aviation sector, which reflects the positive forecast for the country’s economy and offers tremendous potential for growth and development.”

“Boeing is proud that Jet Airways will be the first airline in India to take delivery of the 737 MAX,” said Boeing Commercial Airplanes President and CEO Ray Conner. “The 737 MAX will bring new standards for fuel efficiency and economics, and a premium passenger experience to Jet Airways.”

The 737 MAX incorporates the latest technology CFM International LEAP-1B engines, Advanced Technology winglets and other improvements to deliver the highest efficiency, reliability and passenger comfort in the single-aisle market.

The new single-aisle airplane will deliver 20 percent lower fuel use than the first Next-Generation 737s and the lowest operating costs in its class – 8 percent per seat less than its nearest competitor.

The rapidly growing airline said it had nine more A380s and 71 additional 787s on order, describing the delivery of the first two planes in its updated fleet as “momentous”.

The A380 is to enter commercial service on December 27 with a flight to London Heathrow, while Etihad’s first 787 flight will land in Duesseldorf in Germany on February 1 next year.

“By deploying the A380 on to London, we’ll be able to sell more seats, and that’s the same for Sydney and New York,” Hogan said, pointing out Etihad’s three Heathrow slots were insufficient.

The expansion of the three has brought criticism from so-called legacy airlines, and complaints of unfair competition with the state-owned operators.

Hogan said Etihad synchronises its flight schedules with those of its partners in Europe, and through codeshare agreements with other carriers including Air France-KLM.

“We work on a codeshare basis, hand in hand,” he said, brushing off complaints from legacy airlines by saying “competition is competition”.

The European Commission last month approved Etihad’s acquisition of a 49-per cent stake in debt-laden Alitalia. The carrier is also still formalising its equity investment in Swiss-based Etihad Regional, operating by Darwin Airlines.

Hogan said Thursday his carrier in not in talks to increase its stake in Jet Airways, and has “never been in talks” to buy a stake in unprofitable South African Airways, as has been reported.