Honduras coach Jorge Luis Pinto says his team need to be aggressive from the start of their second leg intercontinental playoff against the Caltex Socceroos in Sydney on Wednesday.

Colombian-born Pinto, 64, said his players needed to play in an aggressive but smart manner if they are any chance of upsetting the Australians on home soil on Wednesday night.

Australia is in a good position heading in to the second leg in Sydney after a 0-0 draw with Honduras on Saturday (AEDT) at the Stadio Olimpico Metropolitano. 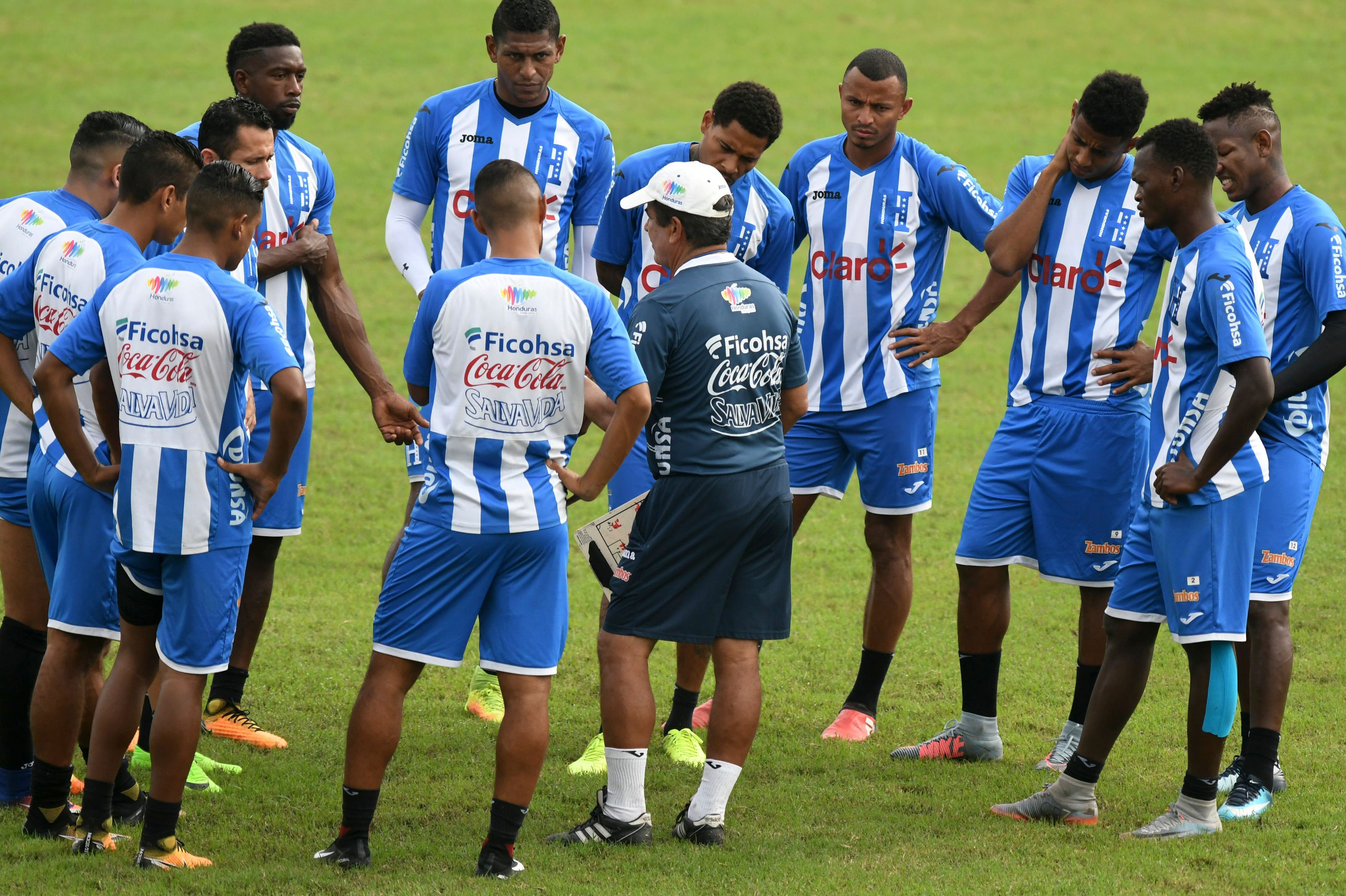 But Honduras are very much in this tie, reminded Pinto.

“[The players need] a cold head but hot blood and be very aggressive throughout. I know the boys can turn it around,” he told the media on Tuesday.

The Hondurans went long on a number of occasions last Saturday as they sought to make the most of their pacy strikers on a bad pitch.

Pinto joked: “Without a doubt we’ll be employing long through balls and if the head coach of Australia is watching, he has some insights into the game,” he said with a smile.

Meanwhile, much has been made about the recovery and travel for this second leg, one in which Australia has spent big on a charter flight home and high tech to prepare the players for a second big game in five days across two continents.

“Without a doubt, that [recovery] can be an advantage to Australia,” Pinto conceded. 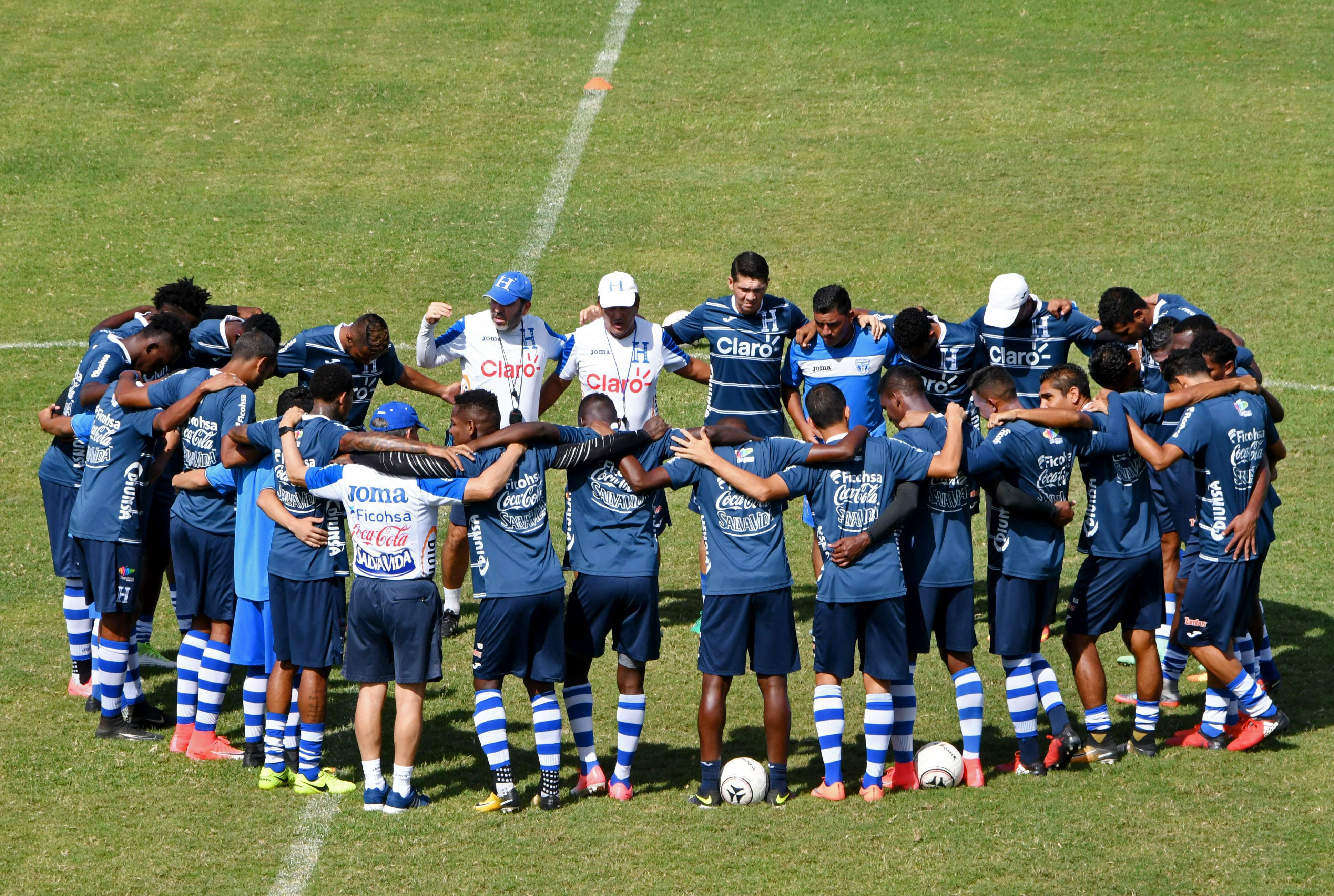 Caltex Socceroos coach Ange Postecoglou has promised Aussie fans his team will ramp up the intensity on Wednesday night in the second leg of their inter-continental World Cup playoff with Honduras.

Australia is in a strong position heading in to the second leg after an impressive display in a 0-0 draw with Honduras on Saturday (AEDT) at the Stadio Olimpico Metropolitano.

But with fresh legs to come in – such as key players Mark Milligan and Mat Leckie and perhaps a few others who didn’t see game time on Saturday – Australia will be in a strong position.

Honduras, for their part needed to win and win well at home.

Now they will have to deal with the challenge of a high-intensity Aussie team, backed by a huge crowd on a good pitch as well as recover from the long flight to the Harbour City.

It’ll be a tough ask for Jorge Luis Pinto’s men. 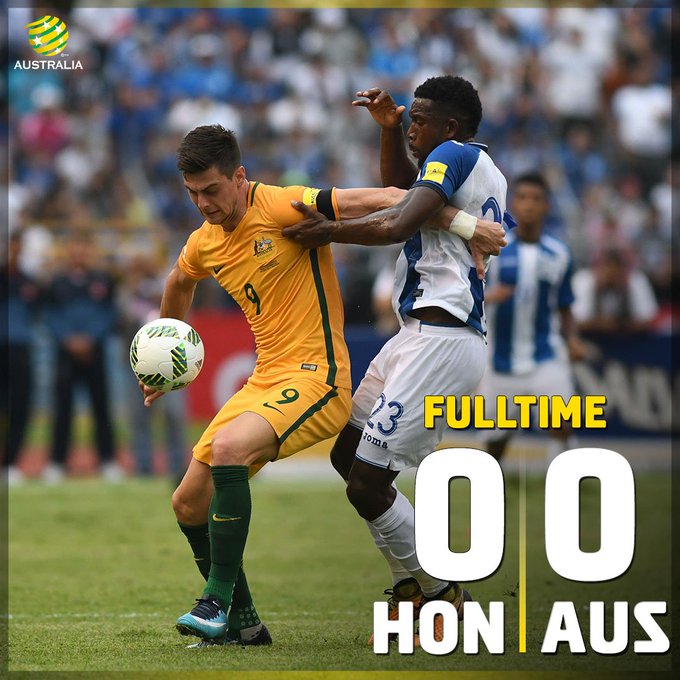 “They [Honduras] were spent at the end also, and we’ve got fresh legs coming in and boys back in Australia who are ready to go,” Postecoglou told Fox Sports after the game

“And some boys tonight we didn’t use who’ll be ready to go.

“We’ll go hard [on Wednesday in Sydney]. We’ll put the pedal down and go as hard as we can for 90 or 120 minutes and they’ll have to keep up with us.”

Australia arrive back in Sydney on Sunday on a chartered flight after a brief stopover in Hawaii, a full day before Honduras touch down on a commercial flight via LA. 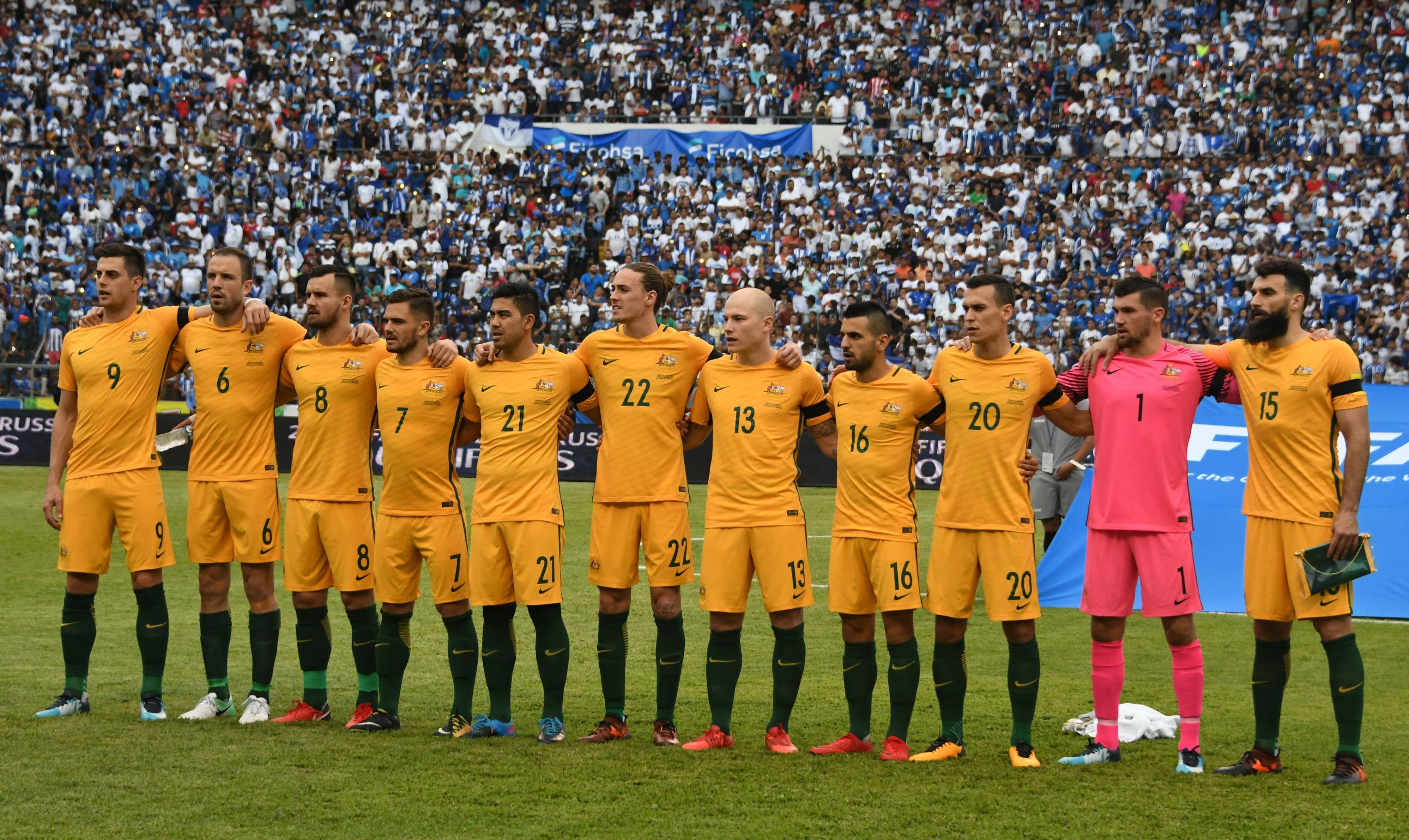 San Pedro Sula: The Socceroos have escaped ‘The Tomb’ unscathed but remain no closer to Russia after being held to a goalless draw against Honduras at the Estadio Olimpico.

Australia were brave, at times inspirational but ultimately unlucky as they make the long trip from Central America back to Sydney with neither the win or vital away goal their performance deserved. If there was any victory, it was simply one for morale as the Socceroos outplayed “Los Catrachos” at one of the most intimidating venues in international football but were forced to settle for a result that gives Honduras a strong advantage heading into the second-leg in Australia.

They were controversially denied a penalty in the first half when the linesman ruled offside after a spot-kick was awarded. A horrendous playing field thwarted a guilt-edge chance. That goalkeeper Donis Escober”s performance was a candidate for the man of the match was most telling. For coach Ange Postecoglou, he goes back to Sydney with public opinion swinging closer towards his favour after his selection and tactics worked to effect.

Australia had to endure hot temperatures, sapping humidity, a paddock for a pitch and a hostile reception few Australians have ever experienced. When 40,000 fans began stamping their feet frenetically at kick-off, the concrete stands started vibrating. The floor was shaking but the nerves of Australia remained intact despite being rattled. Mat Ryan fluffed a clearance but went unpunished. The midfield’s defensive shape was pried open from the start but the ever-calm defender Trent Sainsbury kept the Socceroos’ secure in the opening minutes with a potentially goal-saving tackle on Carlos Lanza.

From then, the Socceroos regathered themselves as a five-man defence became resolute while their midfielders created chances of their own. Massimo Luongo would have broken the deadlock in the 11th minute if it wasn’t for a superb save from Escober. They continued to sustained pressure on the hosts while battling every external disadvantage imaginable and midway through the half, the Socceroos silenced the hosts for the first time. Bailey Wright was brought down by Escober in an aerial challenge and Argentinian referee Nestor Pitana pointed to the spot.

The hush turned to outrage before relief swept the stadium when the linesman intervened, controversially ruling offside.

But, it didn’t halt the Socceroos’ and a swift counter-attack through the middle put Tomi Juric through on goal. One-on-one with Escober, Australia’s centre-forward was certain to break the deadlock however a horrendous pitch played into the hands of the hosts – a slight bobble cushioned his shot agonisingly wide of goal.

If the climate and conditions didn’t pose enough obstacles for Australia, they were forced to battle the bruising Honduran players. A relentless individually pressing game was designed to land the final blow to undo the Socceroos’ composure before reaping the rewards with their swift and direct attack. The ever-dangerous Romell Quioto intelligently seized on the space between Wright and Risdon while the threat of Anthony ‘Choco’ Lozano was only dimmed by a vigilant, intelligent display from Sainsbury.

In an advanced role, Luongo a noticeably mature and industrious performance from the midfielder was one of his best in recent performances. He tested Escobar from the edge of the area in the 52 minute before setting up a close range header for Juric that was tipped over the bar.

For all their adversaries, it was the Socceroos tightening the screws on the contest. They brought an ominous hush over the the venue when they broke behind the defence on the hour-mark. A goal was certain as Risdon had two players standing in front of an open goal but his cross at the back past was played behind Aziz Behich and Jackson Irvine.

Australia was doing what so few have in the past in escaping the tight jaws of the infamous, oppressive ground  – one that is proudly boasted by locals as the final resting place of several coaching jobs. As a Socceroos’ win became an increasingly realistic prospect, the fans stepped-up their role. Horns became a weapon, targeted at key moments for the visitors. Jeers fell on the Australian defenders while the inspiring chant of “si se puede” [yes you can] roared around the stadium. When Honduras’ answer to Tim Cahill – Carlo Costly – took off his bib to make his entrance off the bench, the hope behind that chant began to transpire into belief. It sparked an immediate response form Postecoglou who replied with the introduction of Tomi Rogic.

But it was Costly to make the first impact, stinging the palms of goalkeeper Ryan with a powerful shot from just inside the box before charging down the clearance shortly after only for the ricochet to bounce to safety.

The sapping conditions took their toll on Australia who went into survival mode in the last minutes of the game before being struck with the hollow feeling of a goalless draw that gives Honduras the upper hand, knowing a scored draw will book their ticket to Russia.

San Pedro Sula: Passion both on and off the pitch is what Australia’s Ryan McGowan expects from Honduras when the sides come head to head for the first leg of the FIFA World Cup 2018 Russia Intercontinental Play-off on Friday with a place at Russia 2018 up for grabs.

The Socceroos are set to compete in the play-offs for the sixth time, but it will be the first time they have travelled to Central America, where a hostile atmosphere is certain to await as opponents Honduras aim for their third straight FIFA World Cup.

Honduras struggled through their qualifying campaign but a 3-2 victory over table-toppers Mexico in the final round of fixtures saw Los Catrachos seal fourth place in CONCACAF’s six-team qualification group to book a date with Australia.

“In my time in Scotland I came up against Emilio Izaguirre (pictured below), who was at Celtic,” said McGowan, who faced the Honduras defender during his spells at Heart of Midlothian and Dundee United.

“I’d say he’s a typical Honduras player in that he wears his heart on his sleeve, is very skillful, gets up and down and leaves everything on the pitch. I think that’s what we can expect from them and the 30,000 fans at the game on Friday.

“They’re going to be hard to beat and in our faces, but we need to make sure we can rise above that, play the football we want to and get the win.”

McGowan, who now plays with Al Sharjah in the United Arab Emirates following a short stint with Guizhou Zhicheng in China, was part of the Socceroos squad at the last FIFA World Cup in Brazil.

The defender appeared in all three of his country’s games and set up one of the goals of the tournament when Tim Cahill’s stunning left-foot volley from his ball over the top flew past Netherlands ‘keeper Jasper Cillessen in a thrilling game that ended 3-2 to the Europeans.

And, after a 2018 qualifying campaign that has had both highs and lows, McGowan is now firmly focused on overcoming one final obstacle to ensure the Socceroos take their place at a fourth successive World Cup.

“I think it’ll be a very difficult game because, similarly to us, they’ll be disappointed to be in the play-offs and know what’s at stake over two huge games,” added McGowan.

“We know exactly what we need to do now. There’s no getting a win and then relying on other results, so it’s all in our hands and we’re looking forward to that challenge.

“The Australian public like the do-or-die clashes and we’re looking forward to getting back to Sydney and having everything on the line in front of the home crowd.”