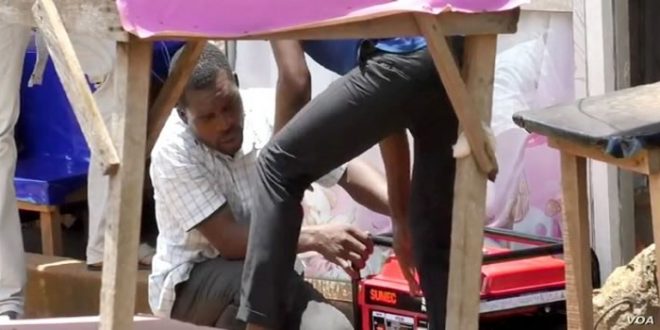 Businesses, media and hospitals in Cameroon’s capital have been brought to a halt because of an unprecedented power failure that has gone on for nearly two weeks. The government has ordered the electric company, ENEO, to restore power within seven days but the company says it needs at least three months to repair equipment destroyed in a fire.

This loud noise from a standby generator is unusual in Cameroon’s capital, Yaounde. But for the past two weeks, many locals have become familiar with it.

The power supply disappeared on August 4th, the day a fire ripped through the city’s main power station, destroying much of the equipment, and leaving more than one million people without electricity.

The government has ordered the electric company, ENEO, to restore power within seven days but the company says it needs at least three months to repair equipment destroyed in a fire.

Henry Ndaa, manager of Divine Finance, a bank in Yaounde, now relies on the generator to keep the lights on and computers running. But this source of power is unreliable, because at times fuel stations cannot supply enough gasoline to keep it going.

“We cannot adequately operate. We use the generator and it goes off and it is weighing negatively on us and our customers. Our members keep complaining,” he told VOA.

Godlove Ndifontah, a researcher, says even the internet supply is no longer regular.

“It is horrible. I am on my machine always almost 24 on 24 [every day], preparing my projects and responding to mails from my partners. [Now] we have to go to where there are generators in order to pay 500 francs ($510) to charge your machine or to charge your phone per hour.”

Cameroon’s minister of water and energy resources, Gaston Eloundou Essomba, says the government is taking steps to replace all of the damaged equipment and will import parts from abroad as needed.Communication minister and government spokesperson Rene Emmanuel Sadi says power is being rationed, and urged people in neighborhoods without electricity to be patient.

“The government wishes to laud the patience, understanding and civic sense showcased by the inhabitants of the capital city. Instructions have been given to ENEO to provide a general calendar of the rationing of supply to the public of the city of Yaounde,” he said.

Authorities have not identified the cause of the August 4 fire, although they refuted newspaper reports of sabotage.