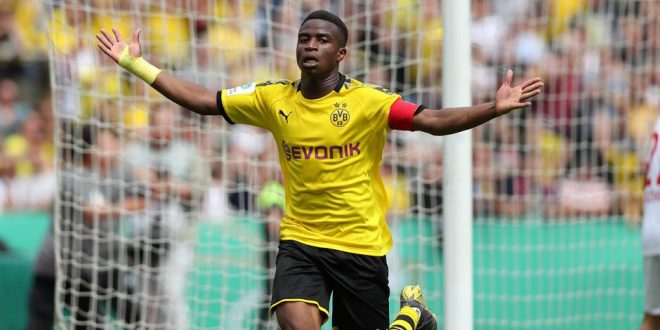 Still only 14, the Cameroonian wunderkind hit the headlines again this week after scoring six times in a U19 youth match. After starring across several age groups, the only thing holding him back is age restriction.

The most bizarre thing about Youssoufa Moukoko scoring six goals in an under 19s (U19) youth match on Sunday isn’t that the Borussia Dortmund striker is just 14 years old. It’s that nobody is particularly surprised.

Moukoko’s goalscoring feats have become the stuff of legend in Germany’s youth divisions. He first came to prominence after scoring a brace on his U17 debut in 2017. He was 12.

The Cameroon-born star in the making has gone on to break a series of records at youth level. 46 goals in 25 games — the greatest ever return in a single U17 season — would have been remarkable enough were he not 14 years old.

More than just a flat-track bully, the child prodigy’s strikes last season included a brace against Schalke in a 4-4 draw en route to winning the league title, and decisive goals in the semifinal and final of the team’s triumphant cup campaign.

At the beginning of the 2019/20 season, there was little doubt he was ready to make yet another step up in age classification.

“Youssoufa has now reached the age in which he is allowed to play in the U19 team,” youth chief Lars Ricken had told German daily BILD ahead of Moukoko’s promotion. “We see this as the right year for him to play in this age group, which corresponds to his performance. He’s scored a lot of goals, is very inquisitive, hungry for success, hardworking and always comes with a smile that distinguishes him, that’s what we look at. The tools are there.”

The decision has been quickly vindicated, and Sunday’s double hat-trick again SG Unterrath must surely have Borussia Dortmund coaches checking the rulebooks to find out how soon the 14-year old can make his Bundesliga debut. Hint: not until the beginning of the 2021/22 season. 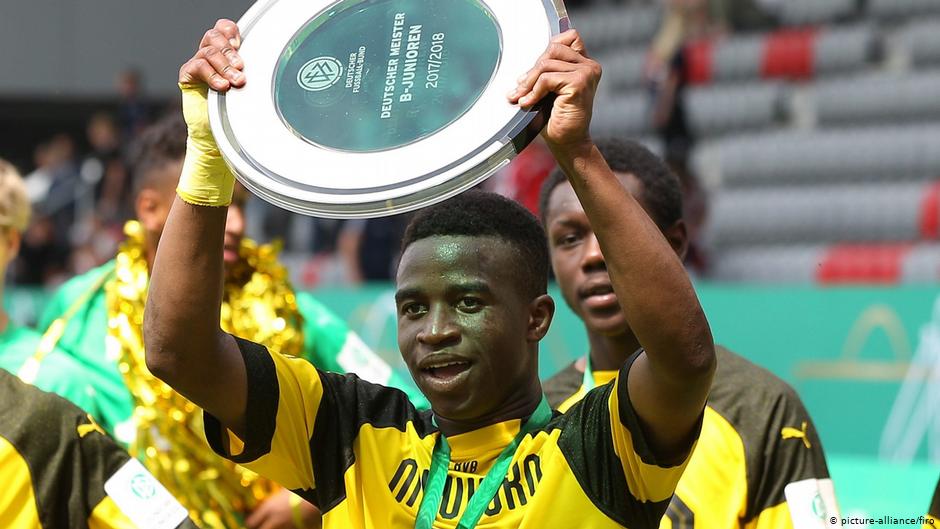 Such goalscoring prowess has naturally brought attention, positive and negative. Moukoko signed a boot deal with Nike worth a reported €10 million ($11.3m) in May of this year, drawing comparisons with Freddy Adu. Aged 14, the American signed his own lucrative boot deal and was tipped to be his nation’s very own Pele. He faded into obscurity instead, becoming a cautionary tale for a too-much-too-young youth football culture.

Others, meanwhile, have questioned his age, including a former coach at Borussia Dortmund. After all, how could a 14 year old possibly be this good? Dortmund youth coordinator, Lars Ricken, jumped to his defense, while Moukoko’s own father Joseph rejected the claims, asking how Youssafa could be older given his mother was still just 28.

The majority of the attention has been overwhelmingly positive, though. Every video of him destroying defenses half his age again drooled over on social media, receiving thousands of shares and comments.

His feats haven’t gone unnoticed in more rarified circles, either. The German FA are thought to be doing everything possible to lure him into a future with his adopted nation. He featured in Germany’s U16 victory over Austria in September 2018 and will recieve further calls-up in the future.

Those are decisions for another day, though. The focus now is to continue his remarkable progress in Germany’s youth divisions before, Borussia fans hope, lining up alongside Marco Reus, Jadon Sancho et al with the Yellow Wall in full support.