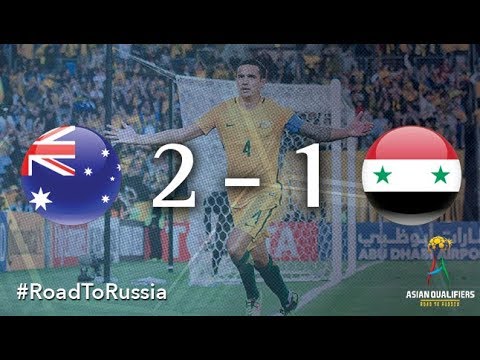 The Socceroos have destiny in their own hands as they head into their final Group B clash at the AFC Asian Cup UAE 2019™, taking on Syria early on Wednesday morning (AEDT).

A draw is all Graham Arnold’s men need at the Khalifa bin Zayed Stadium to ensure progression to the last 16 but you can be sure they will go all-out for victory to build on Friday’s excellent win over Palestine.

Syria has yet to find the net in their opening two matches but are still very much alive in the tournament, setting up a mouth-watering clash in Al Ain.

Building on Friday’s impressive win and performance against Palestine will be high on the agenda for the Socceroos.

There was a real rhythm to Australia’s display in their last outing, and it will now be about consistency and not letting the momentum drop ahead of the knockout stage.

That’s been the theme coming out of the camp in the lead-up to Syria, with players and coaches alike all demanding the same standards for the final group match.

The good news for Arnold is that belief is now sky-high in the camp with every player keen to grasp the opportunity in front of them.

It’s going to be a big 90 minutes ahead for the side, with a win or draw needed for the Socceroos to seal their progression to the Round of 16.

Arnold will be forced into at least one change from the side that defeated Palestine, with defender Trent Sainsbury suspended due receiving a yellow card in each of the opening two games.

Matt Jurman or skipper Mark Milligan – who has been deployed in midfield in the first two games – are the two options to partner Milos Degenek in the heart of defence.

Apart from that, the Socceroos boss has a squad that is in-form and confident.

Strikers Jamie Maclaren and Apostolos Giannou are both buoyant after scoring against Palestine, while there’s a stack of options in attack with the likes of Awer Mabil, Chris Ikonomidis, Robbie Kruse, Andrew Nabbout, Jackson Irvine and Tom Rogic all vying for starting spots.

Mathew Leckie and Josh Risdon are making good progress in their respective recoveries from injury, but Arnold may look to deploy them in the knockout phase rather than the final game of Group B.

“Everyone was very happy with the performance [against Palestine], with the win and that everything we had been working on came off,” the centre-forward said.

“Now we just look forward to the next game, concentrating on that. It’s a very important game for us.

“We want to perform, we want to score a lot of goals, and we want to win so we can be in the next round.”

“We want to carry on and look at ourselves critically and again make sure that we take out the good parts and share that with the players and also the things that we can improve upon,” he continued.

“It’s basically all about us, we make sure that we get the right 11 players on the pitch which we expect they’re going to be very good in dealing with that game.”

Tune into FOX SPORTS 505 at 12.30am AEDT on Wednesday morning to watch all the action live.

You can also follow updates from the crunch clash with Palestine and keep up to date with all the latest news and information from the Socceroos at www.socceroos.com.au and by following @Socceroos on Twitter.