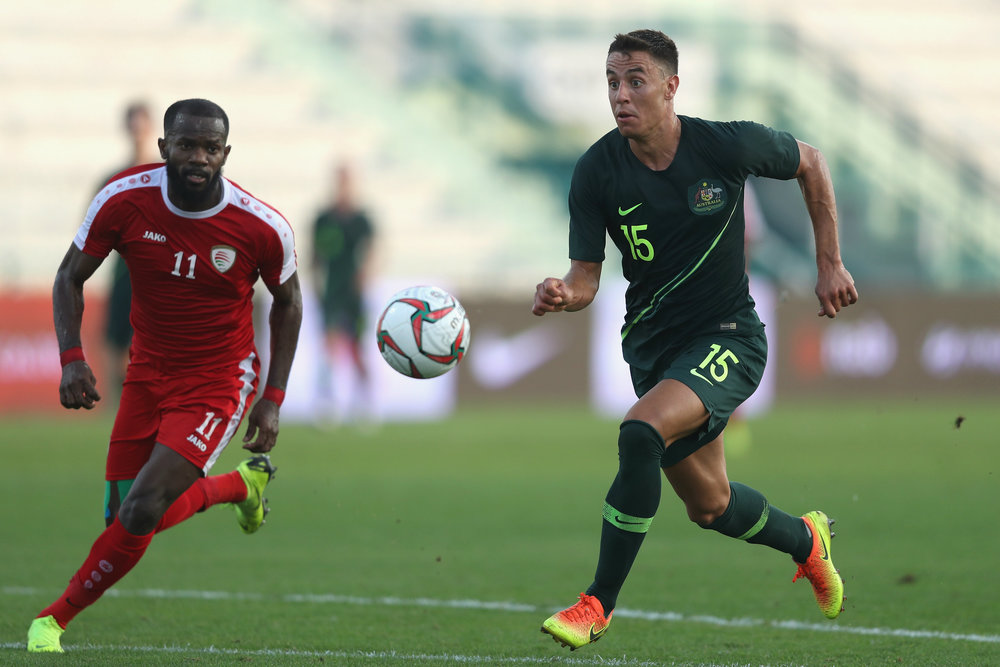 He’s been tearing it up in the Hyundai A-League and Chris Ikonomidis continued his rich vein of form in the Caltex Socceroos’ dominant win over Oman in their AFC Asian Cup warm-up match on Sunday night.

Ikonomidis capped his first appearance for Australia since 2016 with a goal and assist in the 5-0 drubbing in Dubai.

It follows on from an eye-catching start to the Hyundai A-League campaign with Perth Glory, where the 23-year-old has scored six goals and had two assists from just nine appearances.

“There’s definitely a bit of confidence involved but it’s also a maturity thing,” Ikonomidis told Fox Sports when asked about his form in front of goal.

“I’ve reached an age where I can keep cool in front of goal and look where the goalkeeper is.

“I worked really hard over the last few months to get back into the squad and it felt good to be back out there with the team tonight.”

Ikonomidis was part of a pacy four-pronged attack against Oman alongside Andrew Nabbout, Awer Mabil and Robbie Kruse.

And three of those four – including Ikonomidis – were all on the scoresheet inside the first 24 minutes as Graham Arnold’s side surged out of the blocks.

A feature of Australia’s display was the high-intensity pressing across the park, as well as the versatility and of the attacking players, whose pace and movement caused havoc for Oman’s defence.

“We’ve got attackers all across the front four that can interchange and have a lot of creativity,” the Glory star said.

“I think we showed that [against Oman] but we’ve still got a lot more to show.

“We can play anywhere in the front third and I think that versatility will help us a lot.”

Asked if his eye-catching display may have earned him a starting role against Jordan on Sunday night, Ikonomidis said: “We’ll see.

“We’ve got a lot of good players in the squad and we want to put our best team out.”

The Caltex Socceroos open their AFC Asian Cup campaign against Jordan on Sunday night, with kick-off at 10pm AEDT.