An inner-Brisbane house has been gutted by fire overnight, but firefighters managed to protect neighbouring properties and all four occupants of the home escaped with minor injuries.

Several triple-zero calls were made in relation to the Plunkett Street home in Paddington going up in flames and emergency services were dispatched to the scene about 3.40am. 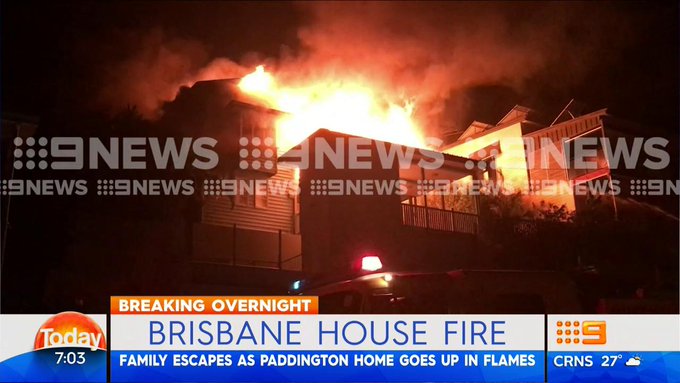 A Brisbane family has run for their lives after a huge fire tore through their Paddington home early this morning.

A QFES spokeswoman said 12 crews battled the blaze, with police evacuating neighbouring properties as firefighters took up defensive positions to stop the flames from spreading.

Paramedics took four people, reportedly occupants of the home, to the Royal Brisbane and Women’s Hospital. One suffered minor burns to their arms and the others were treated for smoke inhalation.

Police said the fire was being treated as non-suspicious and the fire service could not provide more details about what the exact cause may have been.

In a separate incident, fire destroyed a gym and damaged neighbouring real estate and healthcare businesses on the Gold Coast.

The blaze broke out about 4.20am on Saturday at Pacific Pines, with residents in nearby townhouses having to be evacuated until it was brought under control.

No one was injured but police said the fire was being treated as suspicious and have set up a crime scene while investigations continue.