Photo: AFP
A French mayor who is fed up of the large amount of rainfall in his town has attempted to order the sun to shine using his powers as an elected official.
There’s no doubt that France has had a soggy winter, with floods leaving many areas recognised as ‘disaster’ zones and most of the country eagerly waiting for the blue skies of spring.
In fact, France hasn’t seen as much rain in December and January since the rain gauges were set up in 1959, the country’s weather service confirmed at the end of January.
And Serge Rondeau, Mayor of the village of Challans in France’s western Vendée region has decided to take matters into his own hands.
On Thursday the Challans Town Hall Twitter account posted a symbolic order imposing sunshine all day from Monday to Sunday and only allowing three nights of rainfall a week. 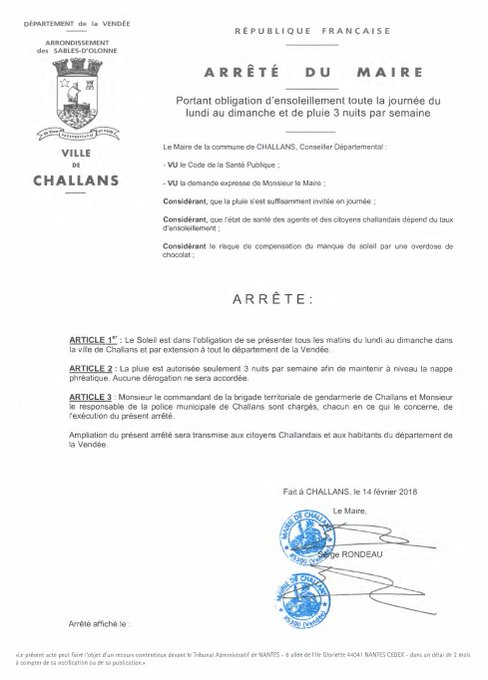 The document, stamped and signed by the mayor himself, goes into detail regarding his motives.
The document cites three reasons for the order: “It has rained sufficiently during the day, the health of citizens relies on the amount of sunshine” and “the chocolate overdose risk due to the lack of sunshine.”
It goes on to say that the sun is “obliged to appear every morning from Monday to Sunday in Challans and throughout the Vendée.”
The rain is allowed just “three nights a week to maintain the level of groundwater.”
And while the order might have been a joke, France has suffered serious damage due to flood waters in recent weeks.
Indeed on Wednesday France declared a state of “natural disaster” for 275 towns and villages following the floods that affected large parts of the country at the end of January.

Ophélie Gaillard. Photo: Aparté Music
An award-winning French musician was robbed at knifepoint of her 18th-century cello, worth more than a million euros, outside her home in a Paris suburb on Thursday evening.
“Help! My cello was stolen this evening in a red dark flightcase,” soloist Ophelie Gaillard wrote in a Facebook post, accompanied by pictures of the instrument.
Gaillard told police that her attacker also forced her to hand over her mobile phone before fleeing on foot in the northeastern suburb of Pantin.
On Facebook she wrote that the cello, which was loaned to her by CIC bank and is valued at nearly 1.3 million euros, was made by Italian luthier Francesco Goffriller, son of Venetian master cello-maker Matteo Goffriller.
The cello case also contained her bow, which she said was the work of acclaimed 19th-century French bowmaker Jean Pierre Marie Persoit.
In 2003, Gaillard was named the best new instrumental soloist at the French classical music awards.
https://www.facebook.com/ophelie.gaillard.54/posts/10156098995382622
Source :  The Local France