An 83-year-old man was arrested in Nakhon Si Thammarat’s Muang district on Tuesday morning over an accusation that he allegedly raped the four-year-old daughter of an in-law niece on February 2.

The girl sustained such serious injuries from the alleged rape that she had to be treated at Maharat Nakhon Si Thammarat Hospital, and was only discharged on Monday.

The suspect, who maintained he was innocent, was arrested on charges of raping a girl under 13 and “taking away” a minor from her parents/guardian for a lewd act, said Muang Nakhon Si Thammarat superintendent Pol Colonel Adisak Thepawan.

Maintaining that he didn’t rape or molest the girl as accused, the suspect only admitted to police that he took the girl to visit his home to play games that day.

The girl’s mother told police on Monday that she left her daughter at the home of her elderly mother, when the suspect, who is a relative of her new husband, stopped by and picked up the girl to visit his home. When the girl was returned hours later, the grandmother noticed she was bleeding and rushed her to hospital.

The girl then told them what the suspect had done to her. The mother waited until the girl recovered and was discharged before filing the compliant that resulted in the suspect’s arrest.

Despite the continued absence of rainfall in Bangkok following a rain-making operation that began on Monday, the level of particulate matter smaller than 2.5 microns (PM2.5) in the city’s air was lower on Tuesday.

In the afternoon, the PM2.5 measurements from the capital’s air-quality monitoring stations reported a declining trend, but the level of PM2.5 in the capital as a whole was still considered unsafe.

Only the monitoring station in Pathumwan district reported a safe daily average PM2.5 level of 44 micrograms per cubic metre of air based on the Thai PM2.5 safe daily standard of 50 micrograms, but the figure is still considered unhealthy in relation to the World Health Organisation standard, which is 25 micrograms.

Meanwhile, the PM2.5 daily averages at three of the other monitoring stations were all higher than both the Thai and WHO safe standards, with Thon Buri district recording 57.76 micrograms, Bang Na district measuring 54.98 micrograms and Wang Thonglang district with 52.34 micrograms.

The monitoring station in Phaya Thai district was still unable to measure air quality, having had a technical issue since January 31.

The operation will continue until the coming weekend, or until the air-pollution situation in greater Bangkok is resolved. 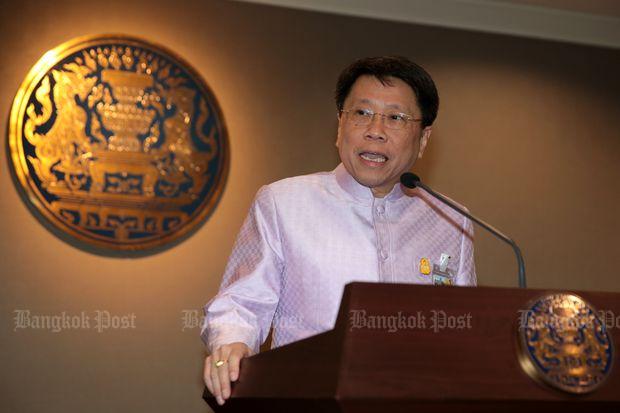 Education Minister Teerakiat Jareonsettasin says he will not resign following his comments on Deputy Prime Minister Prawit Wongsuwon’s luxury watches scandal. Dr Teerakiat told reporters on Tuesday he had met Prime Minister Prayut Chan-o-cha and Gen Prawit and to “clear the air”. “I apologised to Gen Prawit for my bad manners. We’ll work smoothly together from now on,” he said.

He added he did not resign and would continue to help Gen Prayut. “I still have every confidence in him. I’ll stay until the prime minister thinks I’m not suitable.”

Last week, Dr Teerakiat was in England where he met Thai students and businessmen on Friday. He told them when they finished their studies and returned to Thailand, they should bear in mind that law enforcement and conscience of politicians in Thailand were very different. Rule of law doesn’t really exist, he said. He cited as an example Michael Bates, a member of the House of Lords who quit his government post. after showing up late to answer questions. Prime Minister Theresa May later rejected his resignation. “But in Thailand, having 25 watches is okay,” he said.

After the 15-minute meeting, Dr Teerakiat told BBC Thai: “There’s no way [this will happen in Thailand]. We are not trained from a young age to be ashamed. It will never happen. Thick-skinned is more like it here. As for the timepieces, if it was me, I would resign after being exposed about the first watch. People dare not comment. What do they fear? Will they fire me if I say so?” he said. His comments were widely shared in social media, raising the question whether he would resign or be fired.  Dr Teerakiat said on Tuesday the clip on BBC website showed him sitting during the talk but the voice-over came from a conversation he later had with a BBC Thai reporter. “I didn’t  know I was on record so I don’t count it as an official interview. I admit that it’s not the best manners to mention a cabinet minister and I already apologised,”he said. After returning to Bangkok on Tuesday, he went to meet Gen Prayut and Gen Prawit at Government House but did not attend the weekly cabinet meeting in the afternoon.  Also on Tuesday, Ruangkrai Leekijwattana, a former Pheu Thai member and senator, said he would send Dr Teerakiat a letter asking him to consider resigning. According to his asset disclosure to the National Anti-Corruption Commission, the psychiatrist held 5,000 Siam Cement Plc shares (SCC), worth 2.4 million baht based on the closing price on Tuesday. The Constitutional Court ruled in 2010 that SCC shares were “concession shares”were “concession shares” since the company operated on state concessions. The 2017 constitution prohibits a cabinet minister who has such shares from taking the position, Mr Ruangkrai said. NACC spokesman Worawit Sukboon said on Tuesday the NACC would consider the complaint and look into facts before deciding whether to set up a panel to handle the investigation.

Police arrested a man on Tuesday in Ubon Ratchathani’s Muang district for allegedly selling methamphetamine pills to teenagers, some of whom reportedly traded firearms and grenades for the drugs.

Sakda Khamdaeng, 29, was arrested at his rented room in an apartment building at 12.30pm.

Police also seized 200 methamphetamine pills, an M26 grenade and four rounds of ammunition that were found in the room.

Sakda was arrested after he left his apartment to deliver drugs to undercover police. When he learned that the buyer was a police officer, he returned to his room and locked the door, but police used a spare key to open it and arrested him.

They conducted the arrest after learning that Sakda had allegedly been selling drugs to teenagers in the neighbourhood.

Sakda admitted that he had ordered batches of 2,000 pills from an unidentified distributor via the Line application. He said he did not know the real name of the seller.

He allegedly resold the drugs to local teenagers, some of whom paid with grenades and guns, which he sold on Facebook.

The cubs were presented with a special frozen meat cake treat.

The zoo also announced that the cubs would join others on display in the “Tiger World” zone, where a Chinese lion dance and a Wushu martial art show would be performed on Friday.

Netnapa also said the Chiang Mai Night Safari had eight male and nine female black Indochinese leopards in enclosures meant to mimic their natural habitat, which was hoped to encourage their reproduction in line with species conservation efforts.

Police on Tuesday arrested a couple and their two accomplices for allegedly smuggling 23,408 methamphetamine pills and 52.75 grams of crystal meth aboard two flights from Don Mueang International Airport to Hat Yai in Songkhla.

Police said the four suspects had split up and travelled on two flights, with each of them carrying some of the illegal drugs.

Police said that after receiving tip-offs, they had been monitoring the group for five days and made the arrests when they were about to leave Hat Yai airport.

They added that the couple were allegedly major drug dealers in Hat Yai, who had hired Chatchai and Chattraporn to help them transport the pills and crystal meth from Don Mueang International Airport to Hat Yai.

The latest auction was attended by 45 banks and 9 remittance companies. The same institutions attended the auction held on February 13 compared to the previous auction.

Data for the February 13 auction was made public by CBI Announcement Number 3634.

An analysis of the monthly dollar sales by CBI since January 2016 reveals highly fluctuating volumes. During the period from January 2016 to February 2018, sales of US dollars averaged US $1.81 billion per month. Peak volumes were reached in May this year when sales touched US $2.3 billion.

Mosul (IraqiNews.com) Relief teams in Mosul continue to extract corpses of civilians killed during the war against Islamic State militants on  a daily basis, and ambiguity persists as the total of bodies expected.

Ikhnews.com website quoted Abdul-Rahim al-Shamri, a member of the Iraqi parliament’s Human Rights Committee, saying in press statements that “civil defense teams and municipal workers continue on a  daily basis to extract civilians’ corpses from the under the rubbles of Mosul city caused by the international coalition and Islamic State’s explosives”.

According to al-Shamri, “most of the corpses is concentrated in the Old City in western Mosul”.

“The number of civilian martyrs is still unknown due to the absence of an official statistics from the local and central government, but they can be counted in thousands according to estimates and eye-witnesses”, said al-Shamri.

“The extent of damage and death toll is much larger in…the Old City,” said the parliament member.

As Iraqi troops recaptured areas held by Islamic State militants since 2014, they have regularly run into mass graves of civilians and security agents executed by militants over accusations of fleeing the group’s havens or collaborating with security forces.

Iraqi troops recaptured Mosul in July after more than eight months of operations. It was the place from where Islamic State declared its self-styled “caliphate” in June 2014.

Iraq’s war against the Islamic State displaced millions of civilians both inside and outside the country, and left thousands dead.

Baghdad (IraqiNews.com) A police conscript has been killed as gunmen opened fire against him in west of Baghdad, a security source said on Tuesday.

“The victim succumbed to death near his house,” the source added.

Earlier today, a bomb explosion took place in al-Radwaniya district, west Baghdad, leaving a civilian killed and five others wounded. Moreover, two other civilians were wounded as a bomb went off in al-Rashdiya neighborhood, north of Baghdad.

Baghdad was the worst affected governorate, with 323 civilian casualties (90 killed, 233 injured). Diyala followed, with 8 killed and 15 injured; and Nineveh, with 13 killed and 7 injured.