A fragment of masonry fell from on the church’s walls and hit a visitor, identified as 52-year-old Daniel Testor Schnell of Barcelona, on Thursday afternoon.

Schnell, who was visiting Florence with his wife, is said to have died instantly.

Other visitors were swiftly escorted out of the church and it has been closed to the public ever since. It will remain off-limits until authorities are sure it is safe.

The 15th-century basilica, considered one of Italy’s most beautiful, is checked regularly for wear. The Opera di Santa Croce, the organization in charge of running the church, says the latest survey was carried out just a week ago.

Florence’s authorities have opened an investigation into the accident, which consumer rights watchdog Codacons described as “an unacceptable incident”.

It urged the Italian government to increase safety checks in all of the country’s monuments.

In July, a piece of plaster came loose from the ceiling of Sicily’s Acireale Cathedral, seriously wounding one man and a child. In October 2012, a cornice fell from the wall of the Caserta Palace near Naples, without causing any injuries.

In Santa Croce, the lethal fragment fell from just below the ceiling of the basilica, some 20 metres up, according to Ansa news agency. It is thought to have come loose from a “peduccio”, a piece of decorative stonework designed to support the beams that criss-cross the church’s ceiling.

One of Florence’s most visited churches, Santa Croce is the last resting place of famous Italians including Michelangelo, Galileo and Machiavelli.

Photo: AFP
European Parliament chief Antonio Tajani said Europe should “fear” the spread of small nations as Spain struggled Sunday with the Catalonia crisis and the Italian regions of Lombardy and Veneto voted in referendums on greater autonomy.

In an interview with the Rome daily Il Messaggero, the Italian politician said Europe must “of course fear” the proliferation of small nations.

“That’s why nobody in Europe intends to recognise Catalonia,” he said.

“Even (British Prime Minister) Theresa May, in the full throes of Brexit, said the United Kingdom would never recognise Catalonia.”

“Spain is by its history a unified state, with many autonomous regions, with diverse populations who also speak different languages but who are part of a unified state.”

“It is not by degrading nationhood that we reinforce Europe,” he said.

The referendums in Lombardy, which includes Milan, and Veneto, where Venice is located, are taking place in regions that together account for nearly a third of Italy’s economic output and a quarter of its population.

Voters are being asked if they are in favour of their region gaining “additional forms and particular conditions of autonomy.”

If approved, the outcome is only the beginning of a process which could, over time, lead to powers being devolved from Rome.

Secessionist sentiment in the two wealthy regions is restricted to fringe groups with little following.

Tajani, who belongs to the centre right European People’s Party, took care to distinguish between Catalonia’s chaotic independence referendum, deemed illegal by the Spanish government, and Sunday’s votes in Italy.

“First of all these two referendums are legitimate, that was not the case in Catalonia.”

“In Spain, it is not about autonomy, but a proclamation of independence in defiance of the rule of law and against the Spanish constitution.”

Lombardy sends 54 billion euros more in taxes to Rome than it gets back in public spending. Veneto’s net contribution is 15.5 billion.

The two regions would like to roughly halve those contributions – a concession the cash-strapped state, labouring under a mountain of debt, can ill afford.

The two regional presidents, both members of the far-right Northern League, plan to ask for more powers over infrastructure, the environment, health and education.

They also want new ones relating to security issues and immigration — steps which would require changes to the constitution.

Polls in the two regions opened at 7am and close at 11pm.

Photo: AFP
With Karl Marx looking on from an image on the wall, convicted killer-turned-novelist Cesare Battisti says tension is high as a Brazilian court prepares to consider his possible extradition to Italy.

His four-year-old son Raul runs around him and Battisti, 62, seems marked by the nearly four decades he has spent on the run from murder charges in his native Italy.

The fugitive is wanted in connection with four killings — including of two policemen — attributed to a far-left extremist group active in the 1970s.

He has always maintained his innocence and says he is a victim of political persecution.

“The tension is high because if my case was based solely on jurisprudence, I would not be in this situation,” he told AFP in an interview.

He spoke in Portuguese interspersed with a few words of French, at the house of a friend where he stays in the small seaside resort of Cananeia, near Sao Paulo.

In the humble living room of the house, the image of Marx hangs beside another of Argentine revolutionary Che Guevara, a Palestinian flag and a reproduction of Picasso’s “Guernica,” which depicts the bombing of the Spanish town in 1937.

Convicted in 1979 of being a member of an armed gang, Battisti escaped from a prison near Rome two years later and fled to France via Mexico.

Battisti has lived freely in Brazil for the last few years, but always under the threat of extradition demands from Italy, for whom he symbolizes the “Years of Lead.”

That period saw political bombings, kidnappings and killings by extreme left wing and right wing groups in the 1970s and early 1980s.

Battisti was arrested on October 4th near Brazil’s border with Bolivia and later released, but Italy has made a new push for him to be sent back to face justice.

France was on the verge of handing Battisti to Italy in 2004 when he skipped bail and fled to Brazil, where he lived clandestinely until his 2007 arrest in Rio de Janeiro.

He then spent four years in custody until then-president Luiz Inacio Lula da Silva, on the last day of his mandate in 2010, decreed that Battisti should not be returned to his homeland.

The decision to free him sparked outrage in Italy.

Brazil’s current president, Michel Temer, is believed to be more favourable to extradition, which Brazil’s Supreme Court is due to consider from Tuesday.

Battisti, the author of several critically acclaimed novels, said Lula’s decree cannot be overturned more than five years on, addint that there is also an “ethical question.”

Battisti said he is “not sure” Temer is going to extradite him.

“It would surprise me that a president could annul a decree of one of his predecessors,” he said in a calm voice, but with his eyes betraying a certain weariness ahead of the court ruling.

His partner, Priscila, a 31-year-old teacher and the mother of Raul, looks at Battisti with the concern that has been gnawing at her since his arrest at the Bolivian border on October 4th.

Police alleged he had undeclared cash worth several thousand dollars. The judge who ordered him initially detained said it appeared Battisti wanted to flee out of fear of extradition.

Battisti, whose lawyers got him released a few days later, says he was with two friends and just wanted to buy some fishing gear.

In his eyes, he was targeted at the border by authorities who “planned for months, in a big way, and with Italian support.”

The incident led to a media storm that shook the tranquility of his life in peaceful Cananeia, a community of 12,000 where Battisti has lived for years.

Battisti was convicted in absentia of having personally killed the two Italian policemen, of taking part in the murder of a butcher and of having helped plan the slaying of a jeweler who died in a shootout that left his
14-year-old son in a wheelchair.

“I have always said that I am guilty of participating in an armed group and of taking a position against a Fascist, mafia and thieving state,” Battisti said.

“But they have to prove the crimes for which I have been condemned.

“The one thing that bothers me is the pain caused to my family,” he said, mentioning the two daughters he left in France.

But for him, that is part of the struggle, “which is worth carrying out to improve people’s lives, the poor, those who lack access to the world’s riches.”

Russia’s hybrid military forces attacked Ukrainian army positions in Donbas 14 times in the past 24 hours, with one Ukrainian soldier reported as wounded in action (WIA), according to the press service of the Anti-Terrorist Operation (ATO) Headquarters.

From 18:00 Kyiv time to midnight, the militants were firing various types of grenade launchers, heavy machine guns and small arms on the Ukrainian fortified positions near the town of Avdiyivka and Butivka coal mine, which are in the Donetsk sector. In the evening, they had been shelling the Ukrainian fortified positions near the villages of Kamianka and Verkhniotoretske for several hours, using the same weapons.

In the Mariupol sector, the Ukrainian fortified positions near the villages of Starohnativka and Talakivka came under enemy fire from anti-tank and automatic grenade launchers. 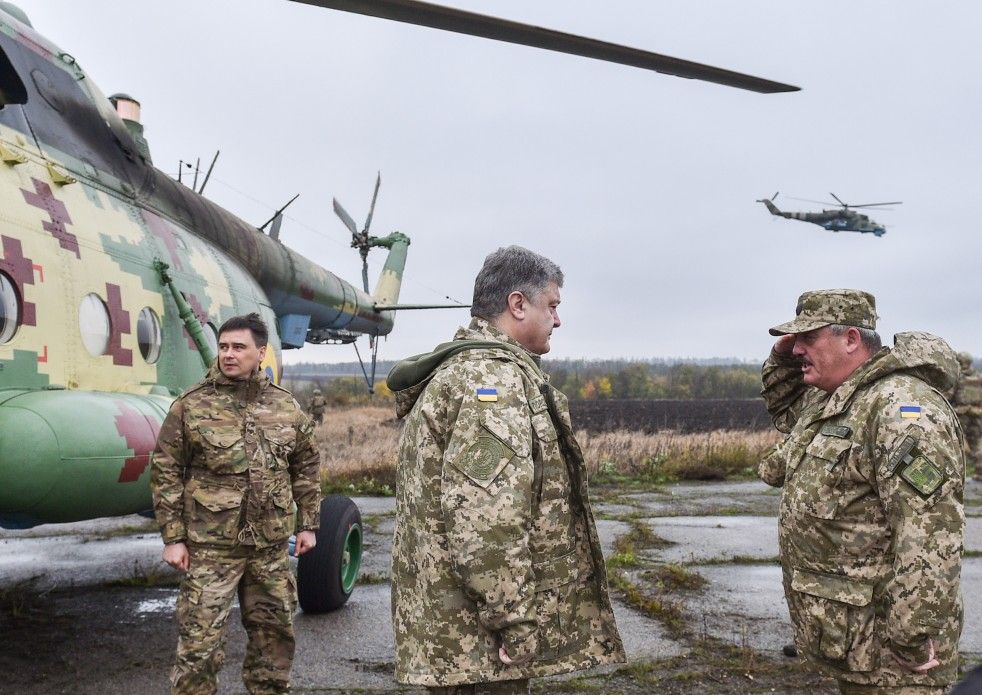 President, Supreme Commander-in-Chief of the Armed Forces of Ukraine Petro Poroshenko visited Avdiyivka, Donetsk region, to hold a meeting on the situation on the frontline together with Minister of Defense Stepan Poltorak, according to the president’s press service.

Poroshenko communicated with the personnel of the 72nd separate mechanized brigade. The president discussed with the military the issue of food, money and material support of the unit, reads the report. 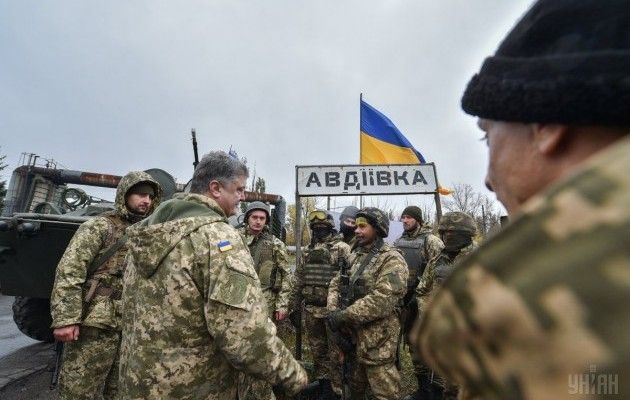 Russia’s hybrid military forces attacked Ukrainian troops in Donbas five times on Sunday, October 22, with one Ukrainian soldier reported as wounded in action (WIA), according to the press center of the Anti-Terrorist Operation (ATO) Headquarters.

At about 01:00 Kyiv time, the militants opened fire on the Ukrainian fortified positions near the village of Shumy, which is in the Donetsk sector. The Ukrainian military fired back with the use of small arms, trying to force the enemy to adhere to the ceasefire. Unfortunately, one Ukrainian soldier was wounded in that fighting. In addition, the Ukrainian defenders of the town of Avdiyivka came under enemy fire today afternoon.