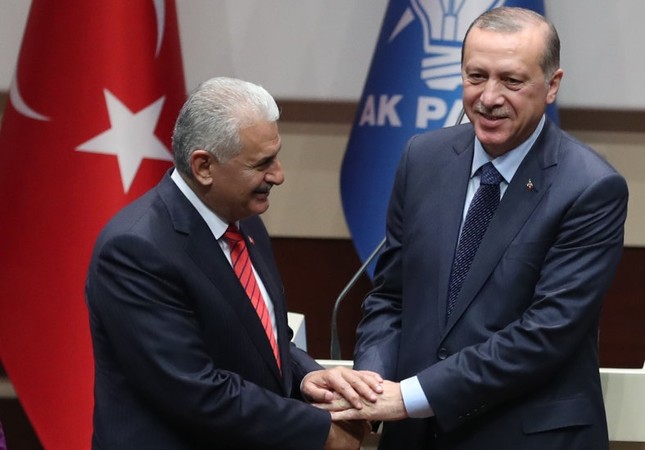 President Erdoğan and PM Yıldırım, shake hands at the meeting held to welcome the president back to the AK Party in early May. PM Yıldırım is expected to be to become second-in-command at the party after President Erdoğan’s return.

President Erdoğan is expected to be elected as the new chairman of the AK Party at the third extraordinary congress, with reshuffle in the party’s top decision-making bodies also likely after the change

The Justice and Development Party (AK Party) is set to welcome the longest-serving chairman, President Recep Tayyip Erdoğan, back to his post with an emergency congress on Sunday to mark the beginning of a new era for the party and the whole country. President Erdoğan is expected to be elected as the new chairman of the AK Party at the third emergency congress ever held in the history of the 16-year-old party.

The president’s return to the post of chairman will reshape the party organization. The slogan adopted by the ruling party for the congress is “Democracy, Transformation, Reform.” There are already talks about a shake-up within the AK Party’s top decision-making bodies, the Central Executive Board (MYK) and Central Decision and Executive Board (MKYK).

Having taken the chairmanship back, Erdoğan will now make decisions regarding local administrations as well. Local administrators and party officials have been criticized in the run-up to the April 16 referendum for their lack of enthusiasm and dynamism. Erol Kaya, deputy AK Party chairman responsible for local administrations, told Daily Sabah that Erdoğan’s takeover is “exciting” for the entire party.

“His taking over will bring a different type of enthusiasm and motivation to the party and local administrations,” Kaya said.

The deputy chairman underlined that municipalities will be in much better form in the wake of Erdoğan’s return. “A total of 879 of the 1,397 municipalities are run by the AK Party. His return will be an overwhelming motivation for local municipalities.”

AK Party group deputy Chairman Bülent Turan voiced his hope for a better and stronger future after the transformation period. Calling Erdoğan’s return the rebirth of the AK Party, Turan said that his natural leadership will become formal on Sunday.

Hinting at the transformation period after May 21, the group deputy chairman said: “The slogan of our congress is ‘Democracy, Transformation and Reform.’ We, as the AK Party, will enter the 2019 [elections] with a strong leader, party administration and government under the leadership of our president.”

Apart from the reshuffling within the party, the new Erdoğan era is very likely to revamp the AK Party in terms of foreign policy, domestic politics and economics. Sources from the AK Party say that Erdoğan will convey significant messages on Sunday that will address all sections of society and the entire world.

Erdoğan’s ties to the AK Party had to be cut off following his election as president. Having garnered nearly 52 percent of the popular vote on August 10, 2014 in the first round presidential elections, Erdoğan took office.

Despite saying good-bye to the party in the summer of 2014, President Erdoğan has repeatedly promised that he would return to the party one day. After the constitutional changes were approved in the April 16 referendum that allowed for the president to be a member of a political party, President Erdoğan became an AK Party member earlier this month.

“Separation from the party was only an official technicality. The distance between us was due to legislation. However, our hearts were always together,” Erdoğan said at a ceremony held for him on May 2 at the AK Party headquarters in Ankara.

Deputy AK Party Chairman Kaya said that Erdoğan’s return will further strengthen the party now that he has reunited with his fellow party members. “It needs to be underscored that turbulence and debates within the AK Party will have been ended with Erdoğan’s return,” Kaya asserted.

On the other hand, Turan commented on the reshuffle within the AK Party as well, saying that trying to move on with old-fashioned structures would hold the party back. “Political persistency requires adapting to changing conditions. In fact, the AK Party’s special place in Turkish politics is because of this. The AK Party gets its strength from change and transformation.”

As for popular interest in the congress, tens of thousands of people will flock to the Ankara Sports Arena where the congress will be held, according to several reports in Turkish media. Around 1,500 buses will head to the capital city for the congress. Also, more than 500 journalists, including members of the foreign press, are expected to be covering the event on Sunday.

The increased appearance of female politicians is expected in the AK Party during the new term as well. The AK Party’s Women’s Branch plans to “reach out to various groups” to understand the reason for the “inability to convey the party’s message.”

AK Party Women’s Branch head Selva Çam mentioned the steps to be taken in the upcoming transformation period while noting that changes will be made to the branch administration in order to reach a wider audience. Çam indicated that members from civil society groups will be invited to join organizations overseen by the branch.

Also, young politicians will reportedly be more visible in the party’s local administrations, while rejuvenation within the whole party organization is expected to bring new dynamism to the AK Party.

Yıldırım to be named vice chairman

As Erdoğan retakes the chairmanship status in the AK Party, current AK Party Chairman and Prime Minister Binali Yıldırım’s future has been discussed. AK Party deputy Chairman Hayati Yazıcı stated on Tuesday that the bylaws of the party will be changed and a “vice-chairmanship” position will be formed to allow Prime Minister Binali Yıldırım to become second-in-command after President Erdoğan’s return.

AK Party’s deputy chairman in charge of organizations, Mustafa Ataş previously commented on the issue as well, saying: “There may be an amendment to establish a vice-chairmanship position. The issue, along with other party-related matters, will be amended once they have been discussed with President Erdoğan.”