Police in Oarai, Ibaraki Prefecture, have arrested a 33-year-old woman on suspicion of abandoning a body after the remains of her newborn son were found in a septic tank outside her house on Monday.

According to police, the woman, Mika Suzuki, says she gave birth to the boy in the toilet at her home in February. Police said she has admitted to flushing the baby down the toilet, Fuji TV reported.

A workman who was pumping out the septic tank on Monday afternoon noticed a blockage and discovered the remains. He reported the incident at a nearby koban (police box).

Suzuki lives in the house with her 54-year-old mother and her 2-year-old daughter.

Roughly 90% of Japan’s major train operators are prepared to halt services upon receiving a government alert over an imminent threat from a ballistic missile from North Korea, a Kyodo News tally showed Tuesday.

This means such an alert could freeze the country’s public transportation systems in an instant, a response transport experts say is necessary to minimize potential damage from an attack but that others say could temporarily paralyze urban activities.

The finding comes after Tokyo Metro, a major subway operator in central Tokyo, suspended train services on media reports of a ballistic missile launch by North Korea in late April and drew criticism for taking an “excessive response.”

Among the 31 major operators in the country surveyed by Kyodo, 27 said they will halt services based on information provided by the government’s satellite-based J-Alert system or a similar alert system called the Em-Net.

Of these, nine said they will suspend all train services upon receiving an alert of a missile launch even if they do not know where the missile would land.

The government first issues a launch alert under the J-Alert system if it sees the likelihood of a missile flying toward Japan. If the government then determines that the missile may hit the country, another alert is issued calling on people to take cover inside buildings.

Many operators stepped up their preparedness in April amid heightened tensions on the Korean Peninsula, with North Korea test-firing a ballistic missile on April 29 following a slew of similar missile launches and rising concerns about its conducting a sixth nuclear test.

“If a train were to go across a bridge that has been damaged by a missile, for example, it could cause great secondary damage, so halting trains based on J-alert or Em-Net information is the right choice,” he said.

“I understand it is aimed at ensuring our safety, but it would be a problem if I couldn’t get home as I have a young child,” said a 36-year-old working mother, who commutes to her workplace on Osaka Municipal Subway trains, which will be suspended on information of an incoming missile.

Kyodo News interviewed representatives of all six Japan Railway group companies and 16 major members to the Association of Japanese Private Railways as well as nine municipalities operating their own public subway services.

A total of 13 operators, including Saitama Prefecture-based Seibu Railway Co and Osaka-based Hankyu Corp, will halt services upon receiving information of an incoming missile to their service areas.

Five other operators said they will also consider other circumstances in making such decisions. They included Tokyo-based Tobu Railway Co and Central Japan Railway Co, also known as JR Tokai.

Tokyo Metro decided in mid-April to stop trains when it receives media reports of missile launch information and actually suspended train services for about 10 minutes when North Korea test-fired one on April 29.

But given the impact on users and imbalance with other train operators, it has since decided to make its decision based on the J-Alert system, it said.

Among other notable responses, the Osaka Municipal Transportation Bureau, which operates the Osaka Municipal Subway, said it will stop using subway ventilators to counter possible chemical weapons use in addition to suspending its train service when it receives a call for evacuation after an initial alert.

Sapporo City Transportation, which will stop trains based on information of a missile launch, said its officials will use office mobile phones to receive emergency alert emails as it cannot use the J-Alert system.

A new road connecting Wukair to F-Ring road opened partially today. This will help commuters travelling from Wukair side to reach F-Ring road without taking the Wakra main road.

The left turn from Wukair side will take you behind Barwa Village and from there to F-Ring road making it easy to reach C-Ring and D-ring roads.

This will also help ease the traffic on the Wakra road.

Those heading towards Corniche or West Bay can still take the Wakra road. 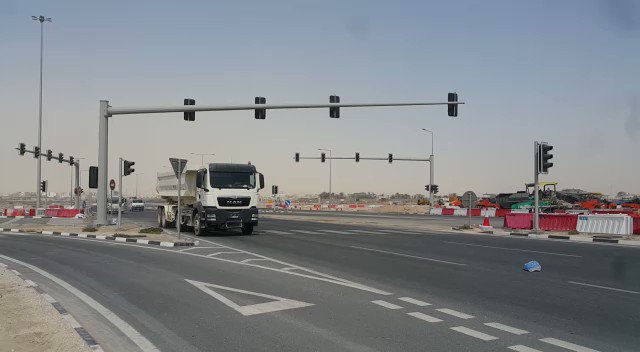 Currently only the side from Wukair to F-Ring road is open. Finishing work on the other side – from F-Ring road to Wukair – is still going on. It should be ready in the coming days. Then the load on Wakra road will reduce considerably.

As per the agreement Transport Ministry will launch electrical cars in its fleets of transport vehicles and buses as a strategic and eco- friendly option to reach the goal of 10% by 2030.

The most important goals of this initiative are to encourage the eco-friendly cars in all sectors as well as installing and managing the infrastructure to provide these cars with energy. This procedure will be supervised by Ministry of Energy & Industry in cooperation with governmental agencies to provide charging stations as well as specify the most appropriate locations to construct those stations around the State.

Concerned sectors and state’s leaders will be encouraged to support “Green Cars Initiative” such as car agencies, airport, municipalities, shopping malls, petrol stations, hotels and operating companies for parking cars.
“This comes within National Program (Tarsheed)’s objectives that works on reducing CO2 emissions rate in Qatar by 7% from the total targeted percentage of all sectors (17%) till 2022,” Al Kuwari said,
Tarsheed has succeeded in reducing the consumption rate of electricity by 18% and water by 20% which contributed in reducing the rate of harmful carbon emissions to be 8.5 million tonnes since launching the national program in 2012 till 2016. Tarsheed has developed a new strategic goal to reduce the capita consumption of water by 15% and electricity by 8% till the year 2022.

JINAN, May 9 (Xinhua) — Twelve people, including 11 kindergarteners, were killedTuesday when a school bus crashed and then burst into flames as it traveled through atunnel in Weihai City, Shandong Province, east China.

Of the 11 children, who were aged between three and six, five were Republic of Koreanationals and six Chinese nationals. They were all students at an internationalkindergarten in Weihai, local authorities said.

The accident occurred at about 8:59 a.m. inside Taojiakuang tunnel in Huancui Districtwhen the bus was on its way to the kindergarten with 13 people onboard, including thechildren’s teacher.

The driver also died and the teacher has sustained serious injuries.

Li, during his inspection tour in Central China’s Henan province, visited an agriculturalmachinery manufacturing plant in Kaifeng and climbed aboard on a newly made tractordeveloped using domestic technology.

The tractor company recently designed and began making the farm tractor, which ispowered by a 230-horsepower engine — a product that used to be dependent on overseastechnology.

Wang Hongmei, the company’s office director, said the tractors are eagerly awaited inNortheast China as well as the Xinjiang Uygur autonomous region, where large-scalefarming and deep plowing are common.

Li, boarding the tractor and learning in detail about its operation from Wang Jinfu, deputydirector of Zoomlion, stressed that such technology upgrades should be more widelyapplied to agriculture modernization.

With almost all control panels inside the operator’s cab, Wang explained that the tractorcan be controlled with only one hand.

The application of big data as well as an internet platform also is used by the company forproduct information collection, as it also developed an internet monitoring platform for allof its machinery products across China.

Breakdown in any area of a machine will be monitored by the internet platform terminal, while such information and data platform are also used for Zoomlion sales.

The company has seen a consecutive increase in sales from January to April this year.

Henan province, located alongside the lower reaches of the Yellow River, has long reliedon agricultural production.

On Monday, Li paid visits to several households in Lizhuang township along the YellowRiver floodplain area, where in villages scattered in low-lying areas suffer frequentflooding. Li urged the relocation of these villages. The township has 18 villages undergoingsuch conditions.

A number of buses carrying tens of militants and some of their family members exited Barzeh area towards the northern countryside, adding that the evacuation of the militants who reject the reconciliation agreement and their families will be carried out in successive batches throughout the next few days until the neighborhood is completely cleared of all armed manifestations, in addition to settling the legal status of the other gunmen in the neighborhood in accordance with the Amnesty Decree No. 15 for 2016, SANA reported.

The Syrian Arab Popular Committee for Supporting Palestinian People and Resisting Zionist scheme has organized a solidarity stand with Palestinian prisoners, who have gone on hunger strike in Israeli jails.

The stand was held Tuesday outside the office of the International Committee of the Red Cross (ICRC) in Damascus with the participation of the visiting delegation of National commission for supporting Arab resistance and resisting normalization with the Zionist entity in Tunisia and Arab Nation League, according to the Syrian Arab News Agency (SANA).

The agency clarified that Secretary-General of the Arab Nation League Hala al-As’ad read a statement during which she asserted that the hunger strike is one of the forms of resistance and national struggle against Israeli occupation authority’s violation of occupied Arab lands.

She called on world humanitarian organizations to act against Zionist entity’s practices towards Palestinians.

“Heroes, who have been able to confront occupier outside jails, are now able to go ahead with their confrontation and to achieve the goals of the hunger strike,” the statement said.

On April 17, hundreds of Palestinians started an open hunger strike in protest of occupation authority’s practice of detentions without trial that has been applied against thousands since the 1980s.

The hunger striking prisoners’ demands include: an end to the transfer of Palestinian prisoners from the occupied Palestinian territory (OPT) into prisons in “Israel”; regular family visits; proper medical care; an end to Israel’s practice of detaining Palestinians without charge or trial in so-called administrative detentions; and stopping the use of solitary confinement.