Rachael Finch is hoping to spread the word about the dangers of smoking.

Former Miss Universe contestant Rachael Finch has one message for young women who take up smoking.

Your future is not pretty. Literally.

Make-up artists will on Thursday give the TV personality a “make-under” in the Queen Street Mall to replicate the effects of a lifetime of smoking.

While young women who take up the potentially deadly habit are no doubt well aware of the health risks, a new Queensland Health campaign aims for maximum deterrence impact by demonstrating the dire effect it has on a woman’s appearance.

Ms Finch said many young women were unaware just how much smoking accelerated the ageing process.

She said on average, for every 10 years a woman smoked, her face aged by 14 years.

While committed smokers may only be aged in their 30s, their face may tell the world they are middle-aged.

“Even if they dismiss the long-term health risks, I doubt any young woman would continue to light-up if they knew just how much every single puff instantly deteriorates their beauty,” Ms Finch said.

“The immediate impact smoking has on physical appearance is not something that I feel young women are aware of.

Despite years of public health awareness campaigns and the escalating cost of cigarettes, a Queensland Health survey revealed that young women are continuing to take up the habit.

Ms Finch is set to join Queensland Health Minister Lawrence Springborg to launch the Your Future is Not Pretty campaign in the Queen Street Mall at 12.30pm on Thursday.

‘‘Research tells us that physical appearance is the main driver for young women to contemplate giving up smoking. This is why this campaign aims to show women the negative effects on their appearance if they continue to smoke.’’

The campaign launch includes a pop-up make-up booth in the Queen St Mall from 9am to 3pm on Thursday, in which make-up artists will “make-under” women to show them what they will look like in 20 years if they continue to smoke.

‘‘We want to make sure young women know that quitting will benefit them on the inside and the outside,’’ he said. 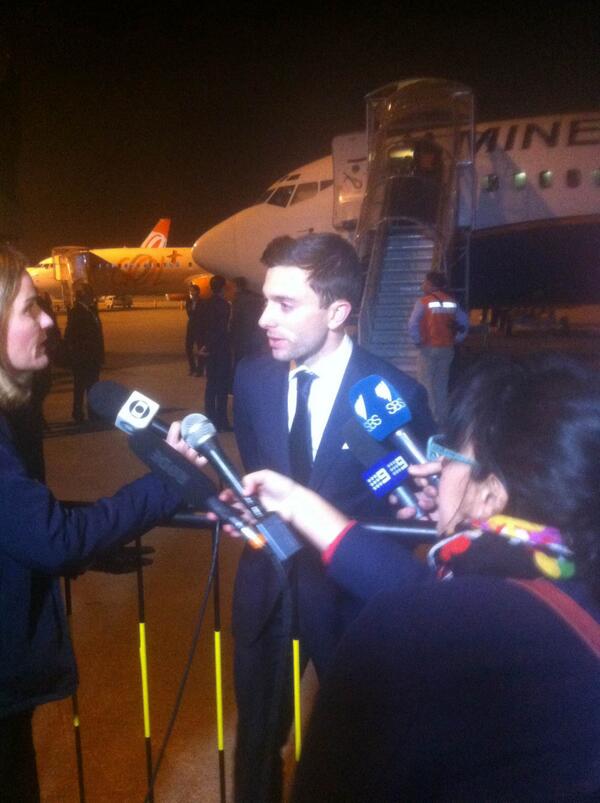 RIO DE JANEIRO, Brazil: The Socceroos have landed in Brazil, the first foreign team to arrive for next month’s World Cup.

FIFA’s top official in charge of the tournament, Jerome Valcke, welcomed the 27-man squad with a message via Twitter on Thursday morning (AEST).

“The @Socceroos have landed! Welcome to the 1st team arriving for the #WorldCup,” he posted with a photo of Australian winger Tommy Oar speaking to media on the tarmac in Rio de Janeiro.

The team will head straight to the beachside city of Vitoria, their base for the duration of the World Cup, about 300km northeast of Rio.

Players will have only a few days to prove their worth to coach Ange Postecoglou before he trims his squad to 23 on June 2.

The Socceroos, the worst-ranked side in the tournament, play a warm-up match against Croatia in Salvador on June 6 before opening their campaign versus Chile on June 14.

A second Melbourne man has been charged with defrauding a bank of about $100 million.

Poker player William Jordanou, 55, of Narre Warren, is accused of providing false documents to the Commonwealth Bank of Australia to obtain about $100 million of loans with three other men.

A second man has now been charged with fraud offences, which allegedly took place over the past decade.

The 49-year-old Lysterfield man is expected to appear in the Melbourne Magistrates Court on Thursday.

The court on Wednesday heard Jordanou was acting as a financial adviser to a Scoresby-based accounting firm when he and his co-accused fraudulently received the loans.

Prosecutor Luke Exell said Jordanou provided the bank with false tax documents, letters of employment and invoices on 40 occasions between 2004 and 2013 to obtain the loans.

Jordanou then used the money to fund his lifestyle and invest in property development projects, Mr Exell said.

Jordanou, who has competed in several top poker tournaments, including the Aussie Millions, faces 142 charges and has been released on bail.

His lawyer George Defteros said his client would strenuously fight the charges.